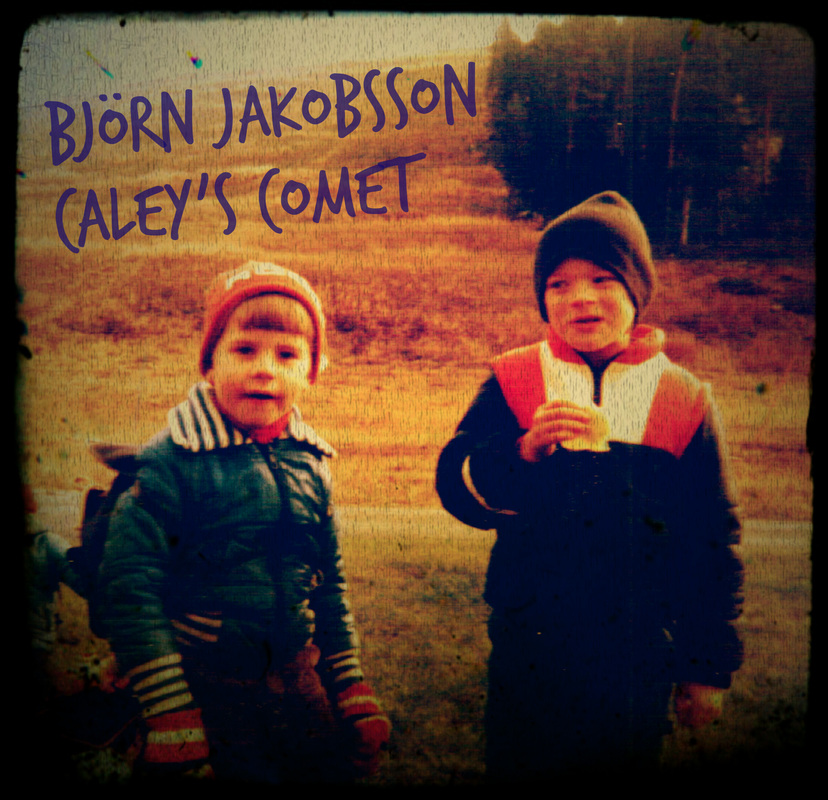 YOU'RE A COMET
STAB ME WHERE IT HURTS THE MOST
AT ALMA'S CAFÉ
THE MOOSE
WHO WANTS TO FLY WITH ME?
FRIEDRICHSTRASSE 7B 1929
THIS SECRET WORLD
I LOVE THE WAY YOU LIE
LIPSTICK ON HER KNEE
SAD EYED GIRL FROM BURNING ISLAND
MAMMA WOULD BE SO APPALLED
CALEY'S COMET

It's always hard to lose a friend,
but it will happen in the end,
so why is it so difficult to comprehend?
Nothing is eternal from what I've seen.
The grass will not always be this green.
I can't understand how lucky I've been.

A comet will always spin around,
and we can enjoy it from the ground.
I think that view is pretty sound.


STAB ME WHERE IT HURTS THE MOST

Don't bother me with your remarks.
To me you're just like a dog who barks.
Just let me be the one I am,
and if you don't, who gives a damn?
So what if I cannot fit your frame?
I have no reason to feel any shame.
You try to cut me with your knife.
I smile and whisper: Get a life!

You can whisper evil things behind my back.
You can give me your vicious glare,
but I'm immune to every kind of attack.
Stab me where it hurts the most.
See if I care!

If you think I hold a grudge,
you are so wrong, you're just a smudge,
in life's eternal playful game.
I can't even recall your name.

"Have a nice meal, or go to hell!"
Just one of the phrases she will yell.
There'll be more!

"You don't like the service? I'll smash your face!
The kind of slobby customers we get, it's a great disgrace!
Eat your cake faster! I need that table now!
You're so fat anyway, you look like a pregnant sow!
Wow, your wife is ugly, you must really be blind!
I've never in my long troublesome life seen such a large behind!
Hey, do you call that a tip? You bastard! Give me more,
or I'll grab my frying pan and knock you to the floor!"

It was late at night and the sky was turning black, I had two hours left to drive.
Who cares if it's a long way, when you got a radio, and soon, very soon, I would arrive.
Who knows why it happened? I may have gone too fast, and the road turned sharply to the right.
In the middle of the road, I saw a gigantic moose. This could mean a painful night, dear boy.
This could mean a painful night.


WHO WANTS TO FLY WITH ME?

A friend of mine has bought an aeroplane.
He's so eager to fly.
He flies in sunshine, he flies in rain
and we've stopped asking why.
To see our planet from above.
To fly high and kiss the sun.
It is his one and only love,
and he keeps asking everyone:

To experience the clear and healthy air,
far away from any street.
This passion, he always wants to share,
with anyone he happens to meet.
People keep watching this happy guy.
They shake their heads and tut,
about this man who loves to fly,
and they wonder if he's a nut.

Up in the air, you feel so free.
There's nothing there, don't you agree?

Let's enjoy a peaceful time on my balcony
Over viewing a busy street.
Let's enjoy the sounds of life from my balcony.
Just relax. Put up your feet.

The yellow tram filled with people goes past us.
We don't have to care about that.
We'll have another cup of coffee,
while watching the neighbors' grey cat

He is really busy, isn't he,
chasing robins and mice.
We'll soon join him, chasing our dreams,
and paying the price

The iceman cometh on his wagon pulled by his trusty old horse,
but I don't need any ice today.
There'll soon be hotter days later this summer, of course
but no season will ever stay.

No worries are on the horizon.
Today, I fail to say anything clever,
but I wish the peace will never resign.
I've got you to rest my eyes on.
I wish this feeling would last forever,
at Friedrichstrasse 7b in 1929

Sweet as licorice were the days.
Also black as outer space.
Some days it was like a war,
filled with nasty words and gore.
Red as our blood and flesh and souls.
Black as the emptiest of holes.

Making fun of what we heard,
stuff that filled this secret world.
When we laughed, we forgot the tears,
and it lasted for loads of years.
Green as the pine trees by the street.
Blue as the sky where we now meet.


I LOVE THE WAY YOU LIE

You see all the beauty that isn't there, like a mirage when the air is clear.
You will forget me when I'm not around. There isn't anything for you to see.
I'm not kidding, it's only me.
and I don't want to cry.
That's why I love the way you lie.

I'm waiting for you, but you're not there, just shows I'm right.
So lonely and blue, you're in my prayer, all through the night.


I will never ever get you anyway, doesn't matter which words you say.
Close, close as pages in a book, I imagine touching your skin
My tears start pouring within,
and I don't want to cry.
That's why I love the way you lie.


LIPSTICK ON HER KNEE

He was a man with normal desires.
She was a dancer at a dodgy stage
She was so hot, she could start several fires
And he was aware of his age
But in companion with young lovely ladies
even the most tired man come alive
And when he happened to own a Mercedes
She asked for a quick test drive
After the drive he took her home to his flat
They started kissing, preparing for that ....
thing that young couples like to do
then he saw something for him totally new

Lipstick on her knee, was not what he expected to see.
He could not believe his eyes. This was quite a surprise
He wondered if he should flee, when he saw lipstick on her knee
But then he thought: "Anything goes", and removed all his clothes

He bowed good bye when she left in the morning
His head was aching, as if it would crack.
She seemed quite bored, she couldn't stop yawning
She would not be coming back.
But he could not forget her beauty
and the scent of her short blonde hair
and her perfume that smelled something fruity
and he wished that she still was there
But how did the lipstick get on her knee?
It was a strange place for that, you must agree
It was doubtless an interesting case
of a kiss on a most unusual place

Lipstick on her knee, was not what he expected to see.
He could not believe his eyes. This was quite a surprise
He wondered if he should flee, when he saw lipstick on her knee
but when she walked out through the door, he wanted some more

Many summers ago in my youth, I went to Burning Island with a friend.
What I'm about to say is the truth, and I'll remember it until the end.
Down by the beach I saw a face, of course it belonged to a body as well.
Features filled with utter grace, and two eyes that could open any shell.

At Burning Island we had such fun,
relaxed summer days in the sun.
Down by the beach for a swim or a chat.
Why can't it always be like that?

It was just a second or two, when I saw those lovely eyes.
Two eyes, so sad and so blue, it was quite a surprise.
In life there are so many things to reach, and many things to say,
but the sad eyed girl at the beach, what is she doing today?

Maybe I'm just a fool who remembers a second's gaze,
but life is an eternal school, and it was just one of several days.
Many summers ago in my youth, I went to Burning Island with a friend.
What I told you is the truth, and I'll remember it until the end.


MAMMA WOULD BE SO APPALLED

You really like to enjoy yourself - you love some good carousing
Just the thought of music,dancing and men, that's for you arousing
But still during daytime you're the girl with the best of  reputations
always thinking about the upcoming night and all its sweet sensations

Living the kind of double life, that you only find in stories
while dancing to handsome gentlemen who dreams of former glories
Daytime you are sweet and kind and have tea with the vicar
Nighttime you wear a lampshade and a pair of knickers.

Your mother would get quite a fit, if she knew the life you're living
Daytime you're a lovely saint, that's the impression you're giving
It's dear to be a party girl, thank heavens your mother's wealthy
But you really should consider whether the life you live is healthy.