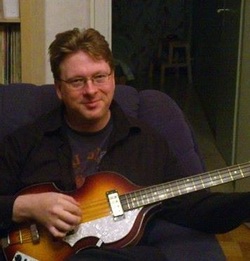 My name is Björn Jakobsson. I grew up in a town in Northern Sweden called Luleå, but I moved to Stockholm in March 2006. I work as a teacher (English and Swedish) in an elementary school in one of Stockholm’s suburbs. I live there and enjoy the life in the big city more than I  ever thought I would.

I have been extremely interested in music since my early childhood. I believe I could even operate a turntable before I knew how to tie my shoelaces. I bought my first record in 1983, and today I have over 9000 records. In 1990 I started buying CDs, in 1994 I started buying second hand vinyl records and in 1998 I began buying 78 rpm records from second hand shops and flea markets. I know I spend too much money on records, but I just can’t help it – it’s just like fishing, you never really know what you get. I also try to learn as much as possible about the artists and music groups I find interesting, so I’ve become known among friends and enemies as somewhat of a walking music dictionary. I never grow tired of music, and since 2010, I've been active on Youtube making videos about my record collection (in the video channel "78rpmblog") and have got in touch with hundreds of other record collectors all over the world. Lovely interesting people who have inspired me and made my musical exploring deeper and even more interesting. Internet can be amazing when it comes to find similar nuts that you can relate to all over the world.

I’ve been playing music and singing for as long as I can remember. I’ve been told that I used to walk around and sing the famous theme from Beethoven’s fifth symphony when I was three years old – but I don’t know if it’s true or not. My first real instrument was a small Casio keyboard/synthesiser in white plastic. I seem to remember that it had a calculator as well, but I didn’t start playing “for real” until 1986 when I started playing the guitar. The guitar has always been my main instrument apart from my singing voice, but I play other instruments such as bass, mandolin, keyboards banjo and accordion as well. Still, I’m not one of the most skilful musicians, but as long as I enjoy it, I’ll keep on playing. I’ve played with some different music groups and I was the leader of a local dancing orchestra called “Bjarnicks” in the mid-90s.

I began writing songs in 1987 and today I’ve written over 400 songs. During the last years I’ve been a bit too busy with studies and work to write that many songs. Still, I’ve never stopped writing, and I make my own humble recordings of them as well. In 1999-2003 I wrote exclusively song lyrics in English – with some exceptions, but returned to the Swedish language 2004-2009. Then I wrote in English 2010-2019 and returned again to Swedish in 2020. Writing song lyrics in English is really much easier than writing song lyrics in Swedish, because you need more syllables in Swedish to describe something than you do if you want to describe something in English.

Links to my Soundcloud page can be found at the "MY MUSIC" section of this website.

I also enjoy writing short stories and other texts, and some day I’ll write my novel – THE novel. Unfortunately, I have no idea when that day will come – but I know what the novel will be about. I’ve included a couple of different texts in English that I’ve written. I love reading as well, but I don't read enough books these days. Not the number I wish I did anyway.

If you want to contact me, feel free to send me an e-mail. I also have a guest book, to write in (it’s in Swedish – but I think it is fairly simple to understand how it works). Check the "CONTACT" section of this website.